Ready for the scariest night of the year? Zombies, witches and vampires roam the streets while Pennywise and Freddy Krüger knock on the doors together. Only a few more weeks, then the time has come... The pumpkins have put on their horrific grimaces, the cobwebs have already been spun and the blood-red punch is just waiting to be drunk. Now only one thing is missing: a gruesomely beautiful Halloween costume!

What costume trends are there on Halloween 2022?

Even if 2022 has thwarted our plans so far in terms of parties, we can still look forward to the upcoming Halloween. Even if it tends to be a little less creepy and scary, houses, apartments and front doors are once again decorated in an eerily gloomy way. Treats for the children are being provided and the preparations for this year's costume are in full swing. How practical it is that a large part of the Halloween costumes comes with a mask anyway!

Fairies, princesses, unicorns and police officers can be on October 31. prefer to stay at home, although an “Everyday Hero” - firefighters, doctors or policemen - can easily turn into a zombie. If you still don't want to do without your beloved unicorn costume, you can turn the fluffy, happy trendy animal into a dark, bloodthirsty creature.

Halloween is the perfect day to turn into your worst nightmare! The more shocking the costume, the higher the fun factor! The return of Michael Myers is particularly suitable as an inspiration to make Halloween unsafe this year. Because the unscrupulous serial killer from the “Halloween” franchise is making a comeback in mid-October. So what's better for Halloween than a full Michael Myers costume? There are of course many other sources of inspiration from horror films.

For example, those who prefer the other classics such as Saw, Scream, The Shining or Clockwork Orange will also find what they are looking for. But fans of newer works will also get their money's worth, e.g. with the typical The Purge masks. So get into your horror movie costume and let the party nightmare begin!

Horror clowns are once again at the top of the list of the scariest costume hits this year. The possibilities of converting a clown costume into a horror figure are almost unlimited here. You can combine it wonderfully with a terrifying horror clown mask, because it causes fear and horror with its realistic painting and detailed surface structure. Apart from that, it saves you having to remove your make-up. However, if you are not a fan of masks, you can also let off steam creatively with a large selection of Halloween make-up and accessories.

To take your outfit to extremes, you can also use fake blood and get some hair-raising wounds. But the king of horror clowns and the height of horror is of course Pennywise, the well-known killer clown from Stephen King's "It". This will make you the gruesome highlight of every Halloween party and you will definitely get the most sweets.

For the detail-loving among us, the red balloon should of course not be missing! With a helium filling, the balloon flies the whole evening and is therefore the perfect horror accessory for every horror clown.

The Dia de los Muertos is traditionally celebrated in Mexico on November 2nd. The actually oppressive background is transformed into a gruesomely beautiful occasion by bright motley colors in the form of flowers, extravagant make-up, rhinestones and colorfulclothes. An elaborate Sugar SkullMake Up looks incredibly spectacular, but sometimes requires some know-how. The day of the dead trend is again the absolute hit this year.

The cult series “Stranger Things” is still totally hyped in this country. In the exciting series, an inseparable clique of teenagers fights against eerie beasts from another dimension. - Well, if that's not the perfect material for the next Halloween party... With a Stranger Things costume you will surely attract everyone's attention. - Promised!

Weird outfits in the 80s style: brightly colored shirts, wildly patterned shirts with suspenders or stylish sailor uniforms are great Halloween costumes. Back to the 80s cult series: How about a Zombie Knight Rider? Magnum, A-Team, ALF,oh there are so many beautiful 80s cult characters...

How about a little black magic now?

Voodoo is mystical, dark & scary - at least in the minds of most people. So - just the thing for Halloween!With a scary voodoo costume you are sure to give you goose bumps. How about a couple costume as a voodoo priest with his doll?

Hunting ghosts instead of playing?

Do you feel like doing something different than usual? Appropriately, on Halloween you can prepare for the theatrical release of Ghostbusters Legacy in November.

With the unmistakable beige overall and the Protonbeam you will attract attention at every Halloween party and spread fear and horror among some of the participants.

Which Halloween costume ideas are you wearing this year?

Of course there are also costumes that always work and that are tried and tested. First of all, there are witches and wizards, both as a nasty Disney villain and in classic form with a pointed hat and broom. Also possible as a whole wizardingfamily. A small cauldron with a handle gives the costume that certain something to collect sweets.

Of course, the Grim Reaper in his wide black robe, optionally also with skeleton applications, and his eponymous prop, the scythe, should not be missing. This makes it one of the simpler costumes, but no less creepy. The face is usually covered with a frightening mask, made up or hidden behind a low-hanging hood.

Zombiesand other undeadare also very popular. Whether pale as chalk with white make-up and fake blood or painted green in scraps of clothing. Everything is possible here. The decisive factor is the face painting or mask. In addition, wounds for sticking on or tattoos can also be used. The more details, the better.

In any case, the vampires in their red and black robes and their iconic teeth are also there. As a fine vampirelady in a puffy dress or as a mighty lord in a cloak with a raised collar.

Which Halloween costumes for Kids are there?

Tends to be anything that adults would also wear. So often the classicsfrom above, but also pumpkinsare not uncommon. The ghost costume is exemplary for Halloween. In addition to the obligatory white bed sheet, there are a few other variants, e.g. as a ghost bride, stick figure style or as a dark ghost.

If that didn't convince you, maybe a little devil costume after all? 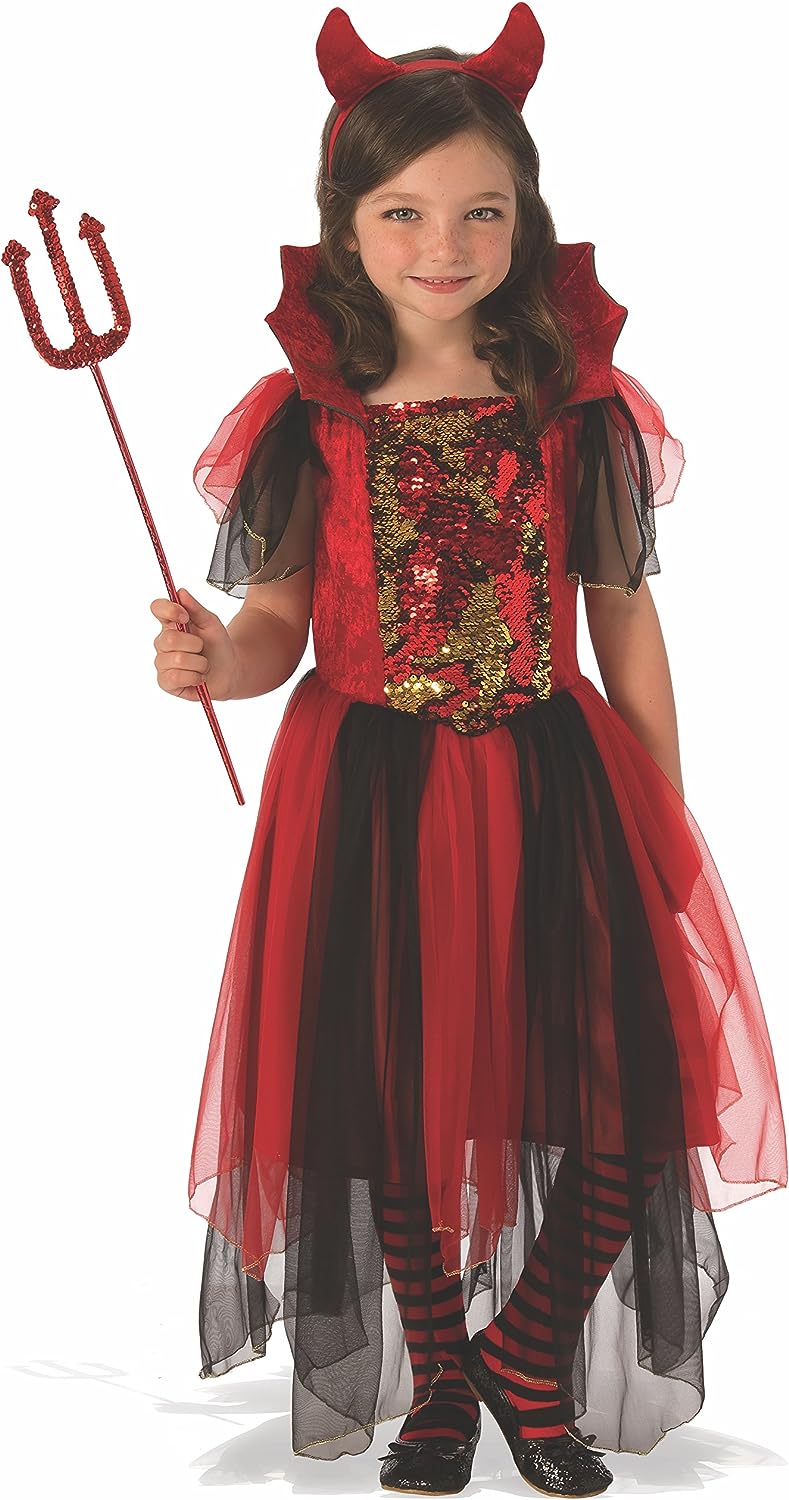 How can you make a Halloween costume yourself?

Of course, you can also do it without a fixed costume by putting together your own personal costume. Individually selected accessories, a make-up set and a black cape, for example. There are no limits for you. You can let your imagination run wild and create your very own nightmare.

Here are a few ideas for basics:

In summary, we can say that your creativity is in demand again this year. The more imaginative your costume, the greater the admiration! But masksare also very popular with Halloween costume trends this year. Ideal for those who prefer to keep their hands off the elaborate make-up! Practical & effective at the same time!

We hope you were able to collect some inspiration with our Halloween costume trends and find a spooky Halloween costume according to your ideas. Because this year there is no end to creativity on Halloween. We wish you a HAPPY HALLOWEEN!

How to Track Amazon Prices with amzdealz.net

Back To School 2022 with amzdealz.net

The Best Easter Gifts, Deals, and Ideas for 2022

Best Fitness Equipment for Home Workouts on Amazon in 2022

These Are the 10 Most-Loved Sneakers on Amazon in 2022

How to Track Amazon Prices with amzdealz.net